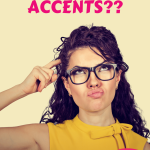 As an English language learner, I know I have a language accent that I will proudly carry for the rest of my life. As an ESL teacher, I was once asked by some of my students how I could help him get rid of his accent. He asked that I spend part of the ESL class teaching everyone how to “change their accent.”

I was very surprised by the student’s urgent to change his pronunciation. However, I understood his concern about having an accent. This is because growing up I was teased and also wished at times I did not have an accent myself.

What is an accent?

According to wikipedia.com, an “accent” is a way of pronunciation particular to a speaker or group of speakers. This definition makes me wonder why some companies create courses to teach something that’s part of someone’s identity? Why not instead, educate bilinguals about being proud of their identity, including our unique accents.

One of the best articles about language accents discusses the experience of Hernan Diaz, an associate director at Columbia University. In his article and video, Mr. Diaz discusses his experience of being accent discriminated against whenever he uses one of the three languages he speaks.

Mr. Diaz himself shares his experience being discriminated when he spoke in each language because in each language he spoke he ha a unique accent. It seems that people overlook the power of having an accent and instead focus on the accent itself.

It is discouraging to see how so many colleges and businesses often fool students into thinking that an accent can be “corrected” or changed. It is also upsetting to see schools and individuals advertise a false idea about reducing or eliminating an accent. What I do know is that one can pretend to speak a different way or try to sound different but that does not mean one can get rid of a language accent.

Some might wonder why some students’ accents are stronger or more noticeable than others. Subsequently, as part of our identities, accents are part of our ongoing development as a person. Accents are often more prominent in the additional languages that we learn to speak.

The older we are when we learn a second language, the stronger the accent one might have. For example, among my siblings you’ll see that my younger sibling has a less noticeable accent than the others. That’s because he began to learn English as a second language when he eas nine years old.

On the contrary, my other siblings and I began to learn English as a second language when we were over 11 years old. That age factor shows an important fact about language accents. The older you are when you learn another language the stronger the accent will show.

This just means that we should be more in-tune with the language we use. As language learners we will sooner or later realize that there are words we have to pause for when speaking. For instance, one word I often struggle with is “butter”. This is a word I think about before I say.

There are several things you can do to practice the words that you know might be difficult to say in another language.

There are times when I have to be extra careful about the words I use when speaking to others. I just know that I have to be extra cautious and that is ok. I may sometimes have to repeat myself to others and that’s also ok. Nevertheless, when in doubt use different words to get your point across with or without an accent.

Power of an accent

Remember that having an accent is a sign of being bilingual and sometimes multilingual. Dr. Hernan Diaz, states that an accent is the echo of one language or tone in another. Accents may vary from place to place but remember that language belongs to everyone.

An accent is part of our identity. It is an asset that makes us our unique selves. We must learn to embrace our accents to show our kids that having an accent is a sense of multilingual power.

2 thoughts on “Do we all have a language accent?”